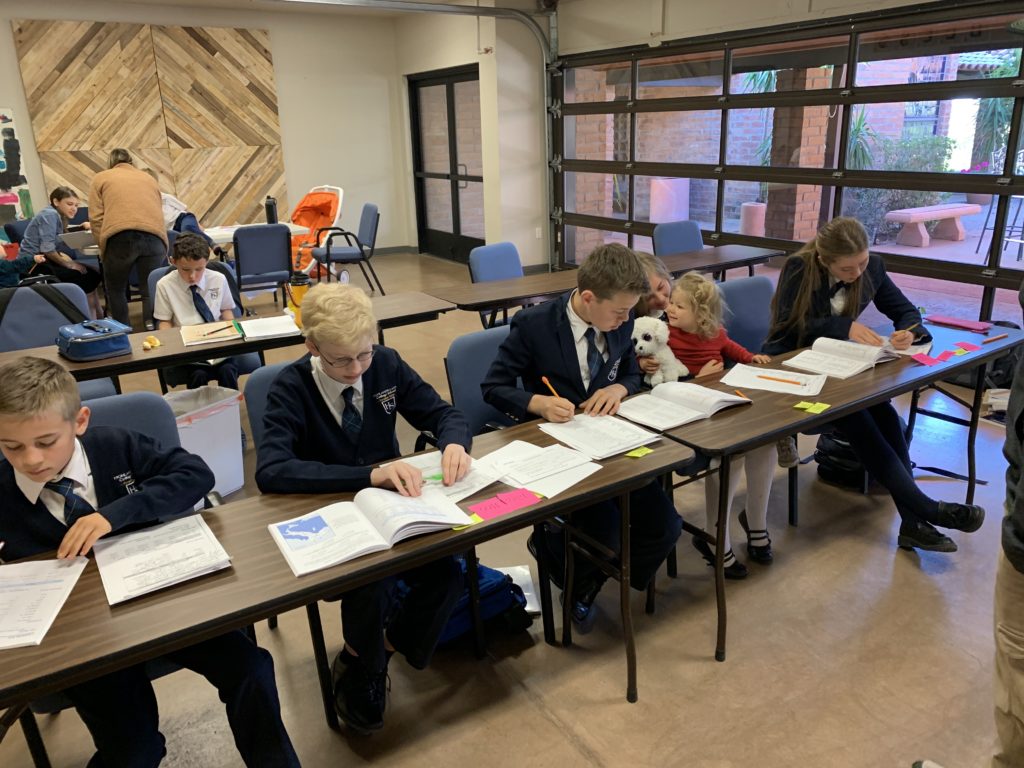 On latin review days we love to play games. And the kids really, really love jeopardy! (As you can see from the photo we also had a surprise guest! Mr. Abello brought our littlest Latin student to say hello!)

If you every want to play jeopardy with your children it works great for any language class and the directions on how to play are in your Memoria Press Latin guides –but I’ll explain it here as it is very simple. I use a white board and put sticky notes on it under various categories. The categories might be written as “Latin Sayings” “Latin Prayers” “Vocabulary” “Declensions/Conjugations”

Then under each category there are 10 sticky notes ranging from 100 to 1000. The children, in turn, choose which category and which amount of points (close to 1000 is the hardest). If I had only one level of latin I’d write the questions before hand under the stickies. But since I’m currently teaching 3 different levels of latin (Latina Christiana, First Form, and Second Form – and we also have Prima Latina in a different room that does their own review days and jeopardy) instead of writing under the stickies I just have the teacher guides on hand and make the questions up on the fly. For example, if they chose Latin Prayers for 1000 I’d ask them to recite the Pater Noster in Latin and then in English too! We had someone do it perfectly!

All their points at the end go their houses. The kids get very excited about their house points and it is a friendly competition (more on the houses here). We teach good sportsmanship and encouraging one another. I was really glad to see one student congratulating another student when they earned a lot of points playing jeopardy. They were in competing houses too. That kind of behavior does not come naturally (usually) and must be taught and thoroughly encouraged. This particular student was usually overly competitive to I was very quick to publicly praise such good sportsmanship.

In the picture below the children are doing a “double jeopardy”. Under each category there is one sticky note that has a star underneath–that is the double jeopardy one! I copy bits from there upcoming week’s workbook assignment and they have a small amount of time to, as fast as they can, fill it out. They are getting homework done as well as earning points! Every right answer filled in counts as a point to their house. You can easily find the double jeopardy music on apple music or elsewhere I’m sure.