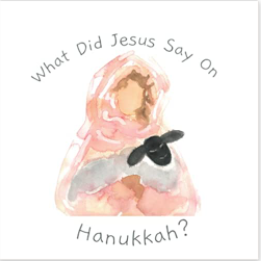 Happy Feast of the Dedication Day!  You don’t hear that one very often, do you?  But based on this verse above, Jesus most likely would have celebrated it given that he was walking in the temple on the very day the Jews were celebrating.  This feast is celebrated even today and you should know that today is the 8th and final day of the Feast of the Dedication.  Today we have a different name that the feast is more well known by.  Have you guessed it yet?  If not, perhaps if I tell the story you will guess it.

The story behind this feast began 2119 years ago.  King Antiochus III with the Syrian army took over Judea and Samaria.  Antiochus III was tolerant of the Jews and allowed them to continue to practice their customs. However, in 175 BC, his son Antiochus IV ascended to the throne. He was terrible.  In 168 BC, he massacred many Jews, outlawed Judaism, and looted the temple. The following year, in 167 BC, Antiochus IV went so far as to erect an altar to Zeus in the temple and defile it by sacrificing pigs there.  As you probably know, pigs are unclean to the Jews so this was the ultimate insult.  The Jews who survived were of course horrified and angry, so Judah Maccabee led a revolt. In 165 BC, Judah Maccabee and his followers were successful in recapturing the temple and began the Hasmonean Jewish kingdom.  This history takes place in the “intertestamental period” which is the period of history between the Old and New Testaments. This Hasmonean Jewish kingdom would last until 63 BC when Jerusalem fell to Roman rule.

So back to when Judah Maccabee recaptured the temple, he ordered it to be cleansed, a new altar to be built, and new holy vessels to be made. After these steps, the temple was rededicated to the Lord. This is where the name comes from and why it is called the “Feast of the Dedication.”  However, to finish things off and get the temple back to normal, pure, undefiled olive oil with the seal of the high priest was needed for the lampstand (often called a menorah) in the temple.  God requires it to burn throughout the night every night (Exodus 27:20). Unfortunately, after the war and all the devastation only one flask was found with only enough oil to burn for one day. Yet when the Jews poured in the oil and lit the menorah, it burned for eight days!  Turns out eight days is the time needed to prepare a fresh supply of kosher oil for the lampstand.  And so God performed this great miracle that they commemorated each year.  Jesus remembered it, and to this day the Jews still celebrate it – we all know it has “Hanukkah.”

For the longest time I thought Hanukkah was just the Jews “version of Christmas” and they wanted a fun gift giving holiday of their own.  But actually, this is not so, it is a holiday that predates Christmas.  And I think it was really neat to know that Jesus himself, very likely celebrated the Feast of the Dedication (or Hanukkah as we now know it).

If you read more of the Bible passage above, you can learn some of Jesus’ important and memorable words that he spoke on the day of the Feast of the Dedication.  One of our co-op members has written and illustrated a book!  I am so proud of her.  It has the words of Jesus that he spoke on the Feast of the Dedication (Hanukkah) from John 9 & 10.  It is available on Amazon and you will have to get yourself a copy!  A beautiful story with such touching and sweet watercolor illustrations she painted herself.  It is great for your own children and also a great witnessing conversation starter for your Jewish friends. It is available on Amazon for $10 https://www.amazon.com/What-did-Jesus-say-Hanukkah  Maybe next year you might try celebrating the Festival of Lights.  It is always good to remember God’s faithfulness.  We can celebrate the Festival of Lights by remembering God’s gift, the Light of the World, Jesus Christ!  What a great way to start the Christmas season.

If you’d like to learn more about the historical period after Jesus and the destruction of the Temple, there is no better study than to read Josephus’ War of the Jews. Josephus was a non-Christian historian (he was a Jew, turned Roman citizen from the first century A.D.) and he writes about Jesus which makes him a great non-Biblical source that Jesus really did live. He is also considered the most trustworthy source for the destruction of Jerusalem in 70 A.D. The war he writes about is actually Jesus’ prophecies fulfilled, that the temple would be destroyed. This course is a great course to follow up reading the book of Acts with as it is the beginning of the history of Christianity.

(the information for this article was taken from https://www.compellingtruth.org/Feast-of-Dedication.html)