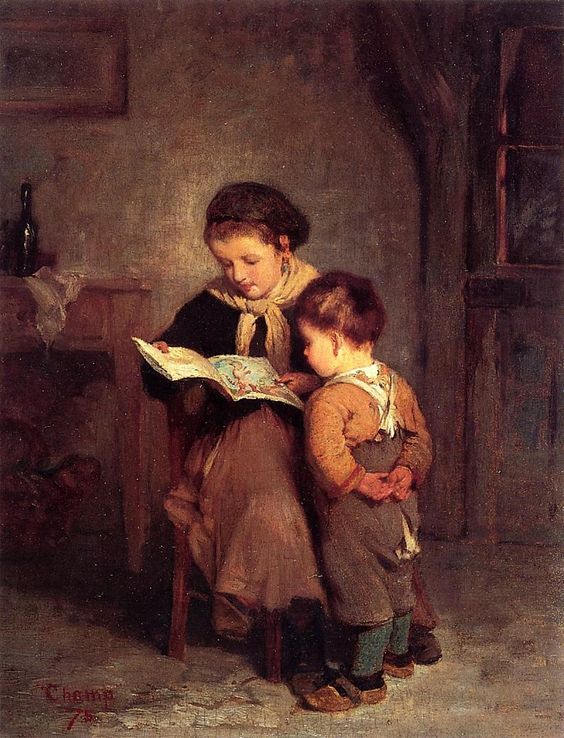 I have now officially taught 5 of my children to read, and the 6th is well on her way. We have struggled, we have made mistakes, we have learned from our mistakes and through time and testing I have found that the classical way is really the best way. So what is the classical way?

The War on Reading: Whole Word vs Phonics

I have since learned that our grandparent and my parents were not so lucky. There was a terrible movement that began in the late 1800s and really culminated in the 1930s-1950s where children were taught the “whole word” method. My poor mother still shudders at the Dick and Jane readers and how they taught her the “look-say” method using them. She described it as awful and incredibly difficult. And even today–there are schools where the teachers are not taught phonics instruction and consequently they don’t teach children how to read using phonics.

The results being–that 50% of the children who are taught this method won’t be able to read.

In the early 1950s, a teacher named Rudolf Flesch tutored a boy who was held back in the 6th grade and couldn’t read. This poor little boy (named Johnny) was unable to read even a simple word like “kid”! Flesch learned that the problem was no one had ever taught him how to sound words out. Once Johnny learned the sounds of letters and the simple rules of phonics he was finally able to read.

From this experience, Flesch wrote a bestseller called Why Johnny Can’t Read, in which he blasted the American education system for failing to teach phonics. Students, like my mother, were expected to learn to read by memorizing words, using the Dick-and-Jane readers as I had mentioned. But what do you do if you meet a word you haven’t memorized? Nothing–because you can’t read it.

Phonics had held its place for thousands of years, but along came this elusive idea of the whole word method. It seemed more fun. Kids could read on day one! Having to learn to sound things out seemed harder. The idea was children would learn the meanings of words, see them in relation to other words, they would read lots of good book and be immersed in words and able readers would be the end result! The microwave generation loved this idea. Let’s make things simpler faster easier, right? Wrong! It was a total disaster. As always, the classical tried and true way has stood the test of time because it is the best way.

Flesch’s book and message resonated with parents, but know-it-all teachers generally dismissed it. Eventually they abandoned the Dick-and-Jane books, but even still today many insist that teaching phonics is boring and unnecessary. Surround children with good literature and encourage them to guess at words from context, teachers said, and they would naturally pick up the ability to decode, the way babies pick up the ability to speak. Unfortunately it just doesn’t work. Atleast not for everyone. Not consistently. You need a tried and true foundational method that will work soundly for all children.

The Principles of Phonics that Make it So effective

Principle #1 Learn the Letter Sounds One by One

The first principle of traditional phonics is learning letters the sounds that each one makes. It stands in stark contract to the “whole word” approach: begin with letters, not with words.

It is a simple progression. You learn one letter at a time, and one sound for each letter you are learning. We start with short sounds (such as ă in băt). All of it is very simple. As students learn the sounds that the letters make they can gradually begin blending them together. Blending is the first formation of beginning to read a word. But it is key to note, a traditional, classical phonics program does not begin with blending or sight words or anything like that. As the first principle states: The sounds the letters represent are taught all by themselves before any blending or reading begins.

The second principle of traditional phonics is extensive practice with blending CV blends (consonant-short vowel). Such as “ba” (like in the word bat or bag). A problem children will commonly have is even though they know the sounds, initially they are slow and space the sounds out so far that their ear cannot recognize the word they are correctly sounding. For instance, they will sound out “bag” like this: “buh…………..aaaah…………….guh……….” Never did they hear “bag”. It helps tremendously if they are taught to blend CV’s first. So when they see “ba” they have practiced saying “ba” (like in bag)— not “buh……aaah……”. Noah Webster even began with this blending progression in his Blue Back Speller which in his day was considered the gold standard of phonics readers/spellers. (side note: ABeka Books is based on Noah Webster’s blue back speller and they do a fantastic job with their phonics program. I have used their phonics programs since my children were little. It’s pretty much all I use from ABeka but it has gotten them reading very well in about a year with every child.)

After blending practice, “consonant-short vowel-consonant” (CVC) words make up the foundation of reading (bag, beg, big, bog, bug, etc). Let’s examine our example word “bag” again. After they have learned to blend “ba” it is very easy to add the “g” sound and hear the word. The student will say ” ba………g” and very quickly their little brain begins to clue in. They say it quicker this time, “ba…..g. ba…g. ba..g. Oh! It’s bag!!!!” They have decoded the word! Triumph! Smiles abound!

Using the simple “CVC words” students will continue to practice and master the most common sound of each of the 26 letters (the short sound). It is also with CVC words that students practice discriminating between the different short vowel sounds ă, ĕ, ĭ, ŏ, ŭ. A different vowel will entirely change the word (i.e. bag, beg, big, bog, bug). They also will be getting invaluable practice for the multi-syllable words since the CVC words are contained in so many of them (such as “big-ger” or “beg-gar”)

The third principle of traditional phonics is the systematic presentation of English spelling patterns in a logical and time-tested sequence, progressing from simple to more complex. Although the order is somewhat flexible after CVC words have been learnt, a typical sequence of the basic spelling (phonics) patterns covered in beginning phonics would be:

While the exact order and selection of phonics patterns can vary from curriculum to curriculum, the important point is that each one is practiced in a word family that illustrates that pattern.

An example of a word family is the 45 common words that spell long a with the ai vowel “team”: maid, nail, brain, etc. One of the very popular curriculums that does not do the word families is “The Writing Road to Reading.” In the homeschool world this method is applied in “The Logic of English” and “Spell to Write and Read.” They are excellent curriculums that I have heard amazing praise. I personally found Spell to Write and Read to be way too teacher heavy for me to use successfully with my big family but the spelling rules were helpful. My only contention is the word lists. They are not taught to children in families. So they may present a week fo spelling words that look like this: maid, bade, prayed. This is highly confusing. All have the long ā sound but are spelled with completely different phonograms. I feel it is far better to practice the classical way and keep phonograms learned in families such as maid, paid, laid. Don’t confuse the child! Keep it simple and progress from there!

Through the traditional/classical method of spelling patterns and word families, students learn thousands of words and the decoding skills to read thousands more. The traditional phonics sequence is effective because it is systematic, not random. It reveals the underlying order of the great variety of English spelling patterns, one pattern at a time. This orderly presentation is an aid to memory and is the very heart of phonics. Without it, many students are unable to recognize, master, and read English words fluently, for the English language has the most irregular spelling of any of the modern languages.

In addition, students develop the visual memory needed to spell English words that have multiple ways to spell the same sound (there are seven common ways to spell the long o sound). If you can spell the word boat with oa instead of bote, it is not because you have memorized a rule, but because you learned it in a word family and have seen it spelled correctly a thousand times. Although there are spelling rules, and English is not entirely illogical, there are just very few useful rules to help you decide among the possible spelling patterns in English. In the instance of “boat” it is helpful to have learned boat with coat, toad, load, etc. This is why “word families” are so useful in spelling.

In traditional phonics, however, spelling is secondary to reading. (This is another big difference with Spell to Write and Read –is that phonics is taught through spelling). In traditional phonics, students are able to read ahead of their spelling ability. While spelling is important, it should not slow down or impede reading fluency. The spelling patterns are taught first for the purpose of decoding, and secondarily for the purpose of encoding (spelling). But this is not to say that traditional phonics based students will not be good spellers, they certainly will as they progress through their spelling lessons, it is only to say that their spelling ability (or rather immaturity) does not hold back their reading ability, which with a solid phonics foundation will very quickly take off.

While students are learning basic phonics, they practice their new phonics skills by reading stories with a high percentage of easy phonetic words, such as “The cat is on the mat.” After sufficient practice and mastery with the most common patterns, students transition from phonetic readers to books with a richer, more natural vocabulary. At some point in first or second grade, reading starts to click and most students begin to read far in advance of their phonics instruction. At this point phonics lessons start to transition into spelling lessons which continue to reinforce reading and spelling throughout the grammar-school years.

The classical Way is Time tested

*Yes, I mentioned a kindle fire and a leapstart device. Do my kids live on devices. No, we do not. Do I recommend you used devices as a primary source of education–no, no I don’t. But can they be a tool at times? Am I writing this blog on a computer? The answer is a resounding yes! Use at your discretion!